The third and final PUSH artist lab, the subject migration, started with an empty room. Paper, rolled and ready, waited patiently to be scribbled on. A cupboard full of pencils, markers and pens stood silently by. A barrage of balls lay by the wall. The tools of play. Serious play. For that’s what art is. 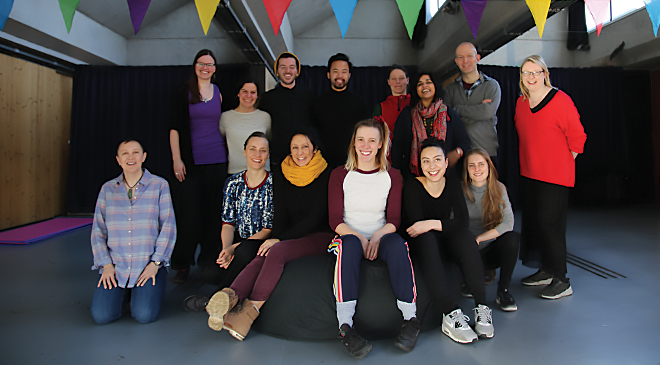 Play – delight in pattern, in finding solutions to self-imposed problems and arbitrary constraints, in doing things for the sake of doing, in making for making: play is the highest human calling. Precisely because it is the farthest remove from biological necessities, and because it calls forth the purest exercise of reason.
All art is playful. All art is play. All play is art. José Ortega y Gasset

There was a plan. There’s always a plan. There would be provocations from experts in the field of migration. Dr Liam Thornton, School of Law, University College Dublin, with an expertise in Asylum and Refugee Law, International Human Rights Law and ECHR Law. Hilary Harmon, Child Refugee Project Manager, Children’s Rights Alliance. And Dr Derina Johnson whose PhD was inspired by three years she spent on the Thailand-Myanmar border working alongside local migrant and refugee partners developing child protection and psychosocial programmes for children and youth.

And so the room filled and warmed over the first few days. It gathered pace and momentum as everyone got to know each other. It became full to bursting with experience. The personal experience of individual artists. Their stories. Resonant. Relevant. The robust experience of physical play. If we were considering making work for young audiences it was useful to remember what it is like to be one. We did not pretend to be children. Rather we reconnected with that divine state of untrammelled being that is the natural state of childhood, impulsive, open, curious, and, yes, joyful. For children are often joyful, and hopeful, even in the face of great adversity. The room became dense with the heady thrust and pull of intellectual enquiry. Questions were asked. Statements made. Opinions, passionate, detached, provocative, declared. All given voice on the understanding that a lab is a place of experiment, it is a place to try things out. It is a place to test, thoughts, ideas, and feelings.

Ultimately, the room was a place of beginnings. And never was that more evident than on the first Saturday when we had the pleasure and the honour to work with The Ark’s Children’s Council. The Ark’s Children’s Council is a group of eleven and twelve year old children who meet once a month over the course of a year to explore active citizenship through engagement with the arts. Part of its purpose is to amplify the voice of the child within the organisation making sure that children’s voices are included in the organisation’s decision making. The day was fantastic. Rich, exciting, and enlightening. The PUSH artists presented a programme of scratch performances and provocations, ensuring at all times that there was time for the children to comment and reflect on everything they had seen and experienced. Favourite memories include the growing excitement of the children in the corners and stairwells of The Ark as they followed the artists on experiential journeys. The remarkable quiet that fell over the group as they watched four dance artists traverse the seats and aisles of the theatre space.

“That made me feel really calm.”

“You were refugees trying to get to a new place.”

Initial confusion giving way to eager engagement when various artists spoke to the group in their home language. Hindi, Arabic, Norwegian, Irish, Dutch, Spanish. And the open expressions on the children’s faces when presented with a piece of abstract dance in development. They watched it, then they performed it, and finally they discussed it. Interestingly, they never asked what it was about.

The day with the Children’s Council was both the mid and the high point of the lab. It was the moment when questions and ideas were tested. How capable are children as an audience? Can the border between audience and performer be blurred? How can children become active participants in performance work? And the experience of working with the children informed the formation of the collective journey and the artists’ individual journeys through the second half of the lab. It is, of course, always good to have a plan but the best laid plans are open to change.

The latter half of the lab saw the group work with the wonderful French/Indian poet, Karthika Nair. We sat on cushions on the floor so that she could read us a story. A story called The Honey Hunter, a story about climate change, a timely story to broaden our conversation. Currently, there are 244 million migrants globally of which 31 million are children. 10 million children are seeking asylum or are classified as refugees. An asylum seeker is someone who seeks protection. There is no protection against poverty. There is no protection against general violence from war. A refugee is someone who is recognised as being discriminated against because of their race, religion or nationality.

In 2008, there were 11,600 unaccompanied children claiming asylum in Europe. In 2016, there were 63,245 unaccompanied children claiming asylum in Europe. It is estimated that there will be 200 million refugees in the near future due to climate change. Karthika looked in our eyes, and then Karthika reeled us in, she reeled us in with her beautiful words. And then, when there were only a few pages left in the story, she left us high and dry. Just at the point when we all desperately wanted to know what happened she stopped and closed the book. And that’s when she set us a task, to write our own ending to the story, in groups, from the viewpoint of all of the different characters we had encountered.

The artists were joined by the partners, the important people in the lead organisations, in the last days of the lab. They came to join in the serious play. And move through the echoes of the impassioned discussion that had taken place in the now delightfully disordered room. The walls full of paper, pictures, thoughts, ideas, lists, synopses of whole conversations.

Earlier in the week Hilary Harmon pointed out that a migrant child might not have the language or the ability to describe what has happened to her/him. Artists do. Have language. Many languages, words, physical images, dance, exploratory play, interactive play. And artists have the ability. To listen. To see. To empathise. To articulate. To reflect. We, as artists, don’t presume to speak for migrant children but we can offer words and pictures and sounds to imaginatively shape a reality. And in the artists’ work a migrant child can look and encounter their self, their face, their language, their story, and the telling validates their experience and lets them know that there is a place for them here. In this room. In this theatre. In this city, in this country, in this world.

And, even if there is limited freedom in the real world we, as artists, know there is immense value in the freedom that exists in the imaginative realm.

You can take a look at some of videographer Geraldine Heany's footage from the Migration Lab here:

Veronica Coburn was the lead artist and facilitator on the third PUSH artist lab, an 8-day residential lab focussing on the topic of Migration from 20 February - 1 March 2018. 14 participating artists took part from Scotland, Belgium, Ireland, Denmark and Norway. You can find out more about the PUSH project here